Home / Travel Destinations / Top 10 Things to Do In Sukhothai (Thailand) 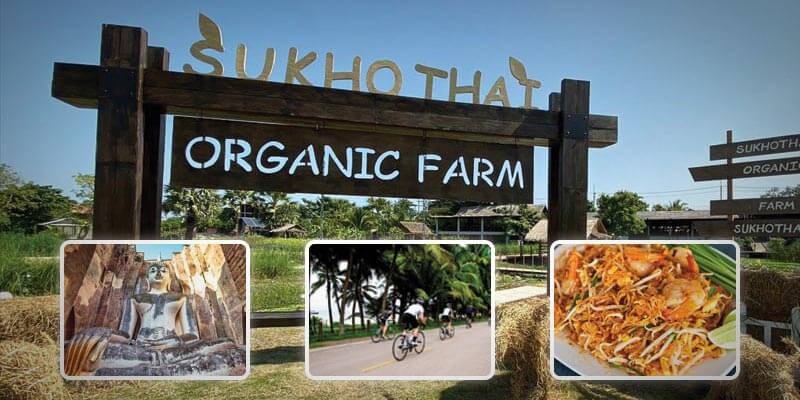 Situated between Bangkok and Chiang Mai, Sukhothai is one of the most impressive ancient capitals of Thailand. Apart from its surviving ruins and traditional monuments, the city is nowadays, associated with various activities and places to visit. The city is considered one of the most important UNESCO World Heritage Sites. It is easily accessible by bus, plane, and train.

The ruins of Sukhothai are one of the most kept-secrets in the country. Throughout the years, the city became a significant center of worship and commerce. It also became the cradle of the nation’s culture, art, and architecture. The unique location of this city and its large geographical spread ensure than no over-crowding will ever occur. That’s actually a great thing for everyone wishing to roam around and discover it. Here is a list of some of the top things to do in Sukhothai.

Rent a bicycle and go on a self-road exploration 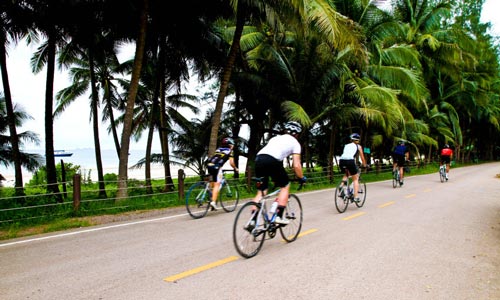 Although visitors can roam around the city on foot, renting a bicycle will allow you to visit a greater range of the impressive sightseeings of the city. Several guesthouses offer some bicycles for free. Alternatively, you can rent one at a really affordable price from the tiny shops that are situate near the entrance to the Historical Park. Since the site is spread out over a large area, the use of a bicycle or motorcycle is the prefer option for most tourists.

Pay a visit to the famous Wat Mahathat 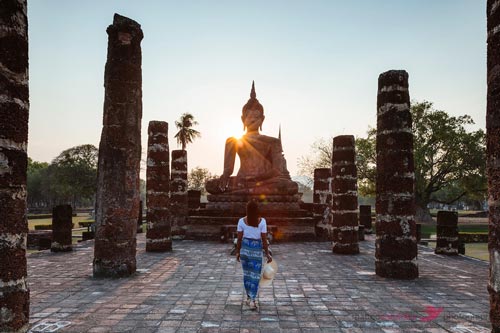 One of the oldest and most important wats in Thailand, the famous Wat Mahathat awaits visitors. Built in a traditional Sukhothai style, this tourist attraction covers an area of four hectares. The temple is considered an important part of the history of this place because it once served as the primary temple for the Sukhothai Kingdom. If you wish to learn more about the history of this temple, you can go on a guided tour.

Another impressive temple, situated in the middle of the Trakuan lake and accessible via a wooden bridge is the well-known Wat Sa Si. Its ruins include 10 chedis still standing and the large statue of a seated Buddha. An interesting fact about this temple is that some of its buildings are still inhabited by monks. Around November each year, a special festivity takes place at the lake surrounding this temple and visitors can admire a spectacle that includes thousands of small floating candles.

Read also: Top 10 Things to Do In Phuket (Thailand) 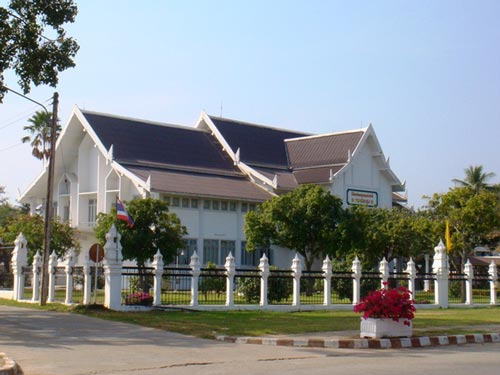 A museum dedicates to preserving several findings from excavations conducted at the broader area of Sukhothai, the Ramkhamhaeng Museum provides a great overview of the changes that occurred in the area throughout the centuries. A series of sculptures, antique structures, and ceramic objects are part of the permanent collections of the museum. Some impressive paintings and images of walking Buddhas are also, part of this museum. Upon entrance, a detail brochure written in English is given to visitors in order to better understand the various sections of this place. 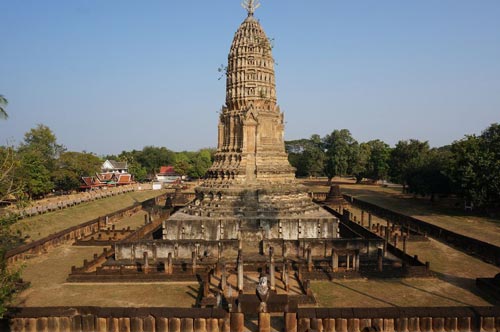 About an hour’s drive from Sukhothai stands a quite small, yet impressive historical park, named Si Satchanalai National Park. If you spend some time walking around the park, you’ll have the opportunity to watch. From nearby the remains of the city’s defenses, along with various house remains and Buddha statues. A pillared pavilion, along with a rock wall made of laterite are also, some of the things you should not miss during your visit. 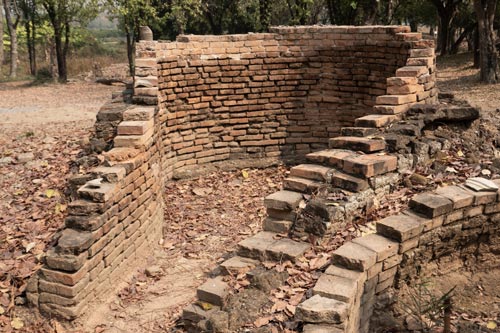 At the end of the 20th-century archaeologists make a great discovery and find dozens of ancient ceramic kilns that are nowadays, accessible to visitors from all over the world. The kilns are about 15 feet long and most of them protect from the weather thanks to the existed roofs. Those kilns once used to fire vases, pots and generally ceramic objects. Some excavate pottery and other decorative features display behind glass.

The Sukhothai version of the traditional Asian noodle soup cannot be easily find elsewhere. A centuries-old recipe still use from locals and the result is definitely something to remember. Sliced pork, vegetables, and bean sprouts are the soup’s main ingredients apart from rice noodles. You can also, enjoy the noodles dry. Down the center of the area, visitors can order this tasty dish at one of the many traditional restaurants.

Read also: Top 10 Things To Do In Palawan Island (Philippines) 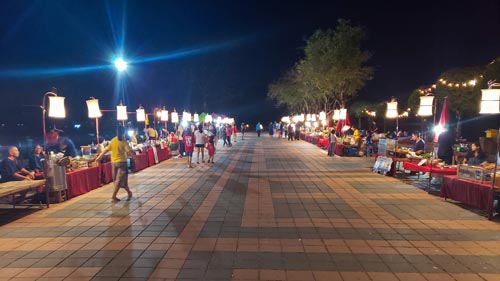 The morning market in Sukhothai is the perfect opportunity if you wish to meet up with the locals, socialize a bit and learn about their way of living. Various stalls selling a variety of ingredients and foods are present and you can also, grab some local fare, as well. Don’t miss the opportunity to taste some sticky rice, typically eaten with your fingers. Fried meats wrapped up in banana leaves is another popular food option down there.

The night market in Sukhothai is also, quite an interesting place for a visit. Many locals gather together during the night in order to chat a bit and if you are lucky enough you may have the opportunity to learn some fun facts about the city right from the locals. 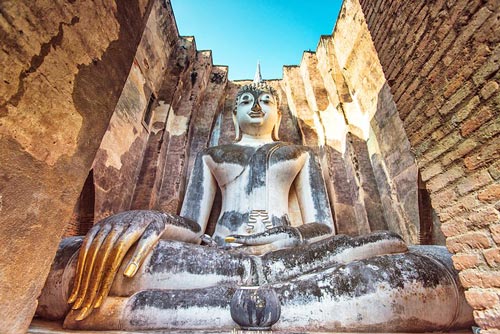 Known for the large ritual pavilion it consists of, the Wat Si Chum is another important temple that hosts a gigantic Budhha, locally known as ”Phra Achana”. If you climb the narrow stairway of the temple, you can admire the view from its roof. Most importantly, across the staircase passage, there is a series of skates that depict different images of the whole life of Buddha. The whole temple area is surround by a moat.

Read also: Top 10 Things to Do in Myanmar (Burma) 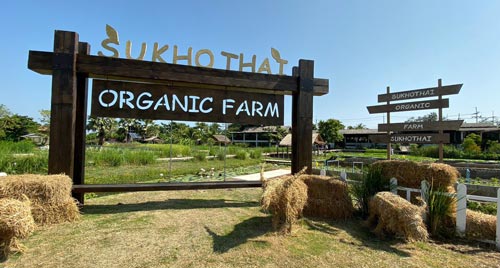 Unknown to most of us, the agriculture project near the airport of the city was the winner of the Thailand Tourism Awards in 2010, 2013, as well as 2015. A visit to this place is a highly fun and exhilarating experience since it offers visitors the chance to watch for themselves rice cultivation and farming techniques, including egg collecting. A homestay option is available for those wishing to admire the place and spend some quality time in nature.

Visiting Sukhothai will definitely be a worthy experience, full of memorable moments. The combination of traditional monuments, temples, and local festivities, along with the historical importance of the place, make it the ideal destination for every type of traveler. Therefore, if you have the chance to visit Sukhothai in the near future, do not miss the opportunity to explore it as much as possible.