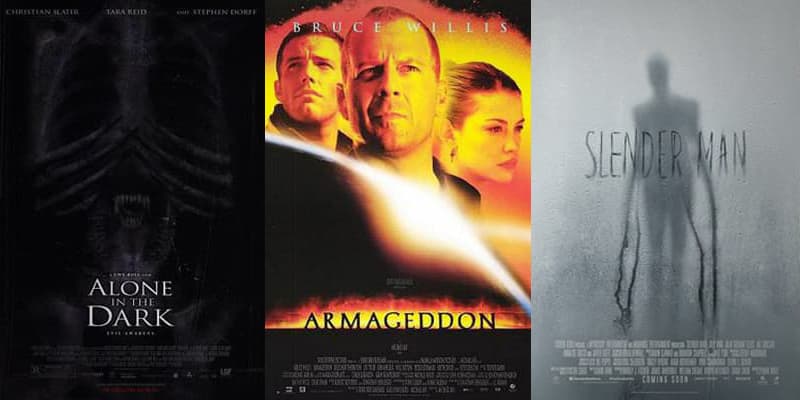 We’ve all experienced it, that moment 5 minutes into a movie when you realise you’ve made a terrible mistake. But you keep going in the vain hope that maybe it’ll get better. It never does.

If you go back far enough in movie history you can find some truly awful masterpieces. Films so bad that they’ve accrued a cult following for their comically poor quality. However in recent years the advance of affordable Computer Generated Image technology and the availability of mediocre acting talent have resulted in a lack of films which are so bad they’re funny. Generally speaking the worst sin a modern film can commit is being boring. Never underestimate humanity’s ability to limbo under the bar of low expectations however.

Here is a totally one hundred percent unbiased and factually accurate list of the Top 10 Worst Movies of All Time which is definitely not based on my opinion. Enjoy:

10 Worst Movies of All Time: 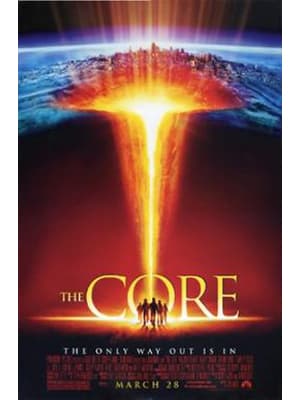 All right, confession time children so gather round. When I was younger, around 8 years of age, I loved core. It was only upon re-watching it recently I appreciated the full glory of Aaron Eckhart’s on screen hissy fit over the death of another character. It was uncomfortable to watch, and it goes on for so long.

This film may have been fun once upon a time but viewed through a modern lens it’s just dumb. Why did the earth’s core stop spinning? Why would nuclear weapons be the solution? Why did can the Mouse character give people free cellphone service for life by blowing on a gum wrapper?

The answer for all of the above is of course because this movie is just dumb.

Pirates of the Caribbean: Salazar’s Revenge

Go back and watch pirates of the Caribbean again. All of them. Right now. I’ll wait. They really didn’t age well did they?

At least with the initial trilogy you had Orlando Bloom and Kiera Knightly’s characters to centre the plot around. That allows you to have Johnny Depp’s Captain Jack Sparrow to bounce around the film, spending the entire trilogy being the wacky fan favourite.

Then later on in the franchise it all falls apart, Bloom and Knightly didn’t want to do any more films but Disney hadn’t finished draining the Pirates franchise dry just yet. Enter On Stranger Tides and god help us its sequel, Salazar’s Revenge the movies nobody asked for. The main issue with this film is that you can feel the fatigue in all the actors from early on in the franchise. And all of the new actors in final film can feel it too judging by the amount of effort they put it.

An important lesson on greed than I’m sure the movie industry didn’t learn. 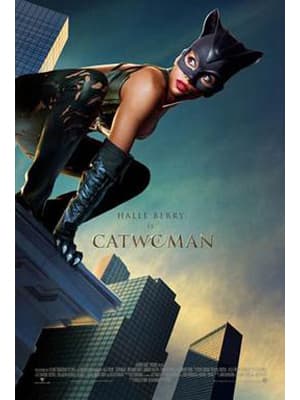 The younger readers among you will mercifully have no idea what this is, there’s a reason for that. For those of us who’ve seen Halle Berry and Sharon Stone’s wet fart of a superhero movie, well we’ve done out best to collectively forget. I saw this movie when I was 10 years old and even then I knew it was bad.

After discovering that the company she works for is actually evil and wants to kill all of their customers with deadly anti-ageing creams, Halle Berry’s character Patience immediately dies for some reason. Then obviously a giant Egyptian cat resurrects her. She spends the rest of the film trying to not be killed by said nonsensical evil corporation. Fighting happens, there’s allot of CGI and then Sharon Stone turns out to be made of clay. Oh and then there’s Benjamin Bratt’s character who keeps turning up to investigate all crime ever. Why is he the only detective in the city? The movie’s answer seems to be: Please God, don’t question any of this absolute nonsense. 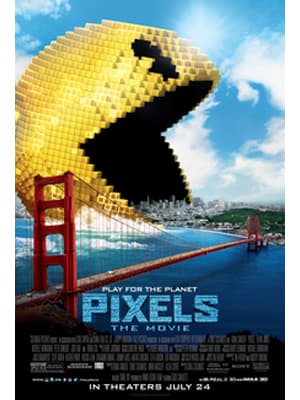 Just insert any Happy Madison Productions film here. If you’ve seen one you’ve seen them all. The Adam Sandler franchise of films have been pulling the same tired formulaic copy-and-paste-plot-line films for the last 20 years. Filming locations are simply vehicles for Sandler’s family vacations.

The only reason I’ve singled out Pixels in particular is because as a fan of classic video games this one felt personally insulting. 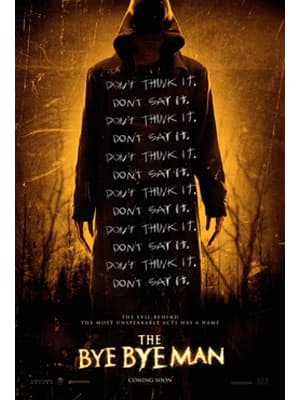 Nothing about this collage teen horror makes sense. Why is there a 4 year old kid at the party? Why does one of the characters keep saying the thing he’s not supposed to say? Who is the infamous Bye-Bye Man?

What’s the point seems to be a big feature in this movie. What’s the point of caring about any of the characters? They’re written so poorly they range from basically non-existent to thoroughly unlikeable. Speaking of non-existent lets talk about the acting talent on display.

A key feature of good horror is liking the protagonists. If I don’t like any of the characters then I’ll probably end up rooting to the antagonist to kill them all. Or at least I would if I knew literally anything about the guy the film is named after. 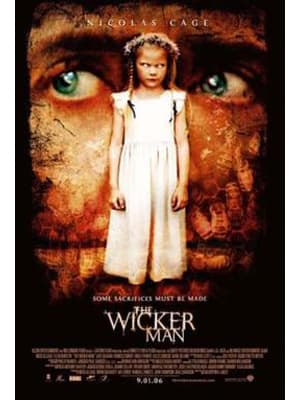 If I wanted to, I could fill this list with Nicholas Cage. It is staggering the number of times he has been cast as the leading protagonist in films. And you’d think, with all of that experience, that at least some of those performances would be good. His contribution to this film ranges wildly from wooden reading off of a script, to borderline comical overacting. And if you’re wondering why I haven’t mentioned any of the other actors? Well they might as well not be there.

The plot itself is complete nonsense, it boils down to the creepy island people not answering Cage’s questions. And for some inexplicable reason he just puts up with it throughout the movie. Add to that the totally tone deaf comedic line delivery and you’re left with a movie that would have made a good comedy. If it weren’t for the fact that its a horror, and a real slog to watch. 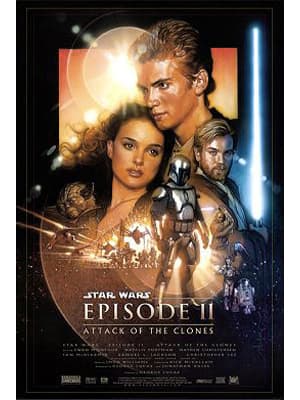 Now you’re probably thinking: “Wait a minute, what about Phantom Menace? Episode II wasn’t that bad.” But be honest. When you remember Episode II being not that bad, you’re just remembering Natalie Portman aren’t you.

This second outing in the Star Wars Prequel Trilogy franchise, is the most egregious example of George Lucas’ attempt to re-invent the wheel using far to much CGI. Action sequences are too frequent, too long and their visual quality deteriorates more with each passing year. Before long you’ll be looking at your watch wondering how much longer this film goes on for. And with a runtime of 2hrs 22mins the answer is far too long.

Add to that Hayden Christensen: the human charisma vortex. Not only does he subject the audience to his quite frankly embarrassing performance, but he also seems to have some sort of Jedi ability to make all of the other actors worse by his mere existence. Ewan MacGregor, Natalie Portman, Christopher Lee and Samuel L. Jackson. All great actors who’ve had their talents drained away by one gormless toad who had no business setting foot on a film set. 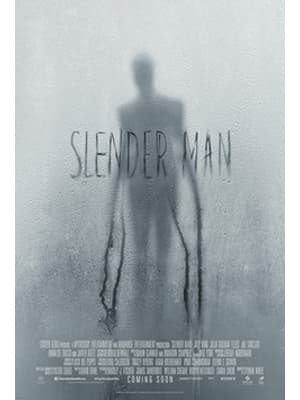 I went to see this film adaptation of a video game based on an urban myth in theatres. It was my first date with my current parter, and it was a good thing we’d been drinking. I’d definitely say the date went well despite the movie.

The plot was so forgettable that I had to look it up just to write this, and I had just re-watched it. It boils down to some teens summon slender man by watching a haunted You-Tube video and then get hunted down one by one. The titular slender man is on screen so often that any fear it causes in the viewer quickly turns to apathy. This is one of those insulting movies which just feel like a waste of time. It clocks in at 93 minutes and you feel every second of it. Your thoughts quickly turn to things you’d rather be doing as your life slowly ticks away. 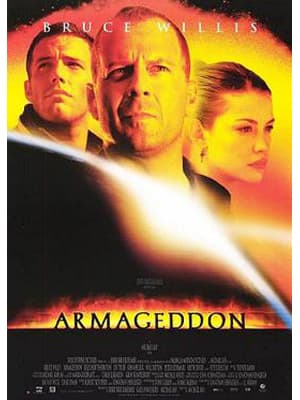 No Top 10 Worst Movies of All Time list would be complete without an entry from Director Michael Bay. But way back 1998 before he was anthropomorphising turtles or fetishising the United States military he made this 2 hour long glorified Aerosmith music video.

With an all star cast including big names like Bruce Willis, Peter Strormare, Steve Buscemi and Liv Tyler you’d think it would be impossible to get this one so wrong. But 22 years on at the time of writing and father time has not been kind to this relic of 90s action cinema. A true audiovisual nightmare to behold I can recommend only because it needs to be seen to be believed. Be warned however that watching it will actively kill off brain cells. 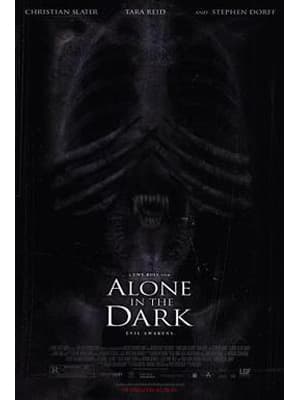 Christian Slater isn’t an amazing actor, but he can do better than this film. I have to wonder why, at some point during production, he didn’t just walk off and never look back. Directed by Uwe Ball, famous for allegedly producing movies designed to fail in The Producers-esque money making schemes, this film falls flat on every level.

The Movie opens with the backstory in the form of a wall of text that lasts several minutes. And whoever was in charge of this mess thought that was okay. The plot twists and turns so fast that anyone who hadn’t given up during the initial lore dump will quickly lose track. And then finally the soundtrack consists mainly of loud heavy metal, I can only assume to distract the viewer from how bad the rest of the film is.

For those more masochistic readers who enjoy suffering through bad movies for some reason. I’d give even this one a miss.

Well that’s it for my One Hundred Percent factual list of the top 10 worst movies of all time. Hopefully you’ve enjoyed reading this list more than I enjoyed re-watching them all.

Have I missed any out? Do you disagree with one or more of the entries? Do you think my list is trash? Be sure to let me know where all arguments are had: in the comments down below.